Oregon Landowner Manages her Forest with Carbon in Mind

Sarah Deumling is one of a handful of foresters in the Pacific Northwest harnessing more of the carbon drawdown potential of their land, modeling forestry for a rapidly warming world.

By Margaret Morales. The full version of this article, from Sightline Institute, can be found here.

The temperate forests of the Pacific Northwest are the Olympic athletes of the carbon world. They can store more carbon, acre for acre, than nearly any ecosystem on earth. A single acre of old growth in the Oregon or Washington Cascades holds the equivalent of a year’s worth of emissions from 250 cars.

But most standard, plantation-style commercial forests in the region perform like once-premier athletes sidelined by injury: they hold less than a third the carbon of old-growth stands. In the face of mounting pressure to reduce emissions, this shortfall offers an opportunity.

Sarah Deumling is one of a handful of foresters in the region harnessing more of the carbon drawdown potential of their land, modeling forestry for a rapidly warming world. Though she never attended forestry school, she has owned and managed Zena Forest—the largest remaining forest in Oregon’s Willamette Valley—for nearly three decades. Deumling’s unconventional training may be the reason Zena looks nothing like a typical logging operation, with a mix of tree species and ages, and an absence of clear cuts.

But the better returns for the climate come with a cost: it takes extra time and labor to manage Zena’s forests, discouraging most other foresters who might follow her lead. Shifting the Northwest’s forest industry to climate-friendly practices will require more than just good will.

Each harvest cycle in a commercial operation resembles a breath—releasing and recapturing a steady carbon load. Carbon stores in these operations can remain relatively constant across cycles. But, when examined over the longer history of the forests, standard commercial operations bring to mind the frenetic and shallow pattern of hyperventilating. After a clear cut, forests need some 200 to 300 years to recapture their lost carbon. The quick clip of the harvest cycle in most commercial forest operations allows for only a partial refilling, less than one-third, of the forest’s full capacity between extractions.

After harvest, as much as 40 percent of the trees—the stems, needles, bark, roots, and other bits—remain on the forest floor, and, unlike in a more ecologically-managed forest, can become short-term emission sources. Commercial foresters commonly burn all this leftover debris, or else leave it in place to decompose rapidly without the protective canopy. Though these methods make way for new seedlings, they also damage the other carbon pools found in native forests—the squishy forest floor, living soil, and decomposing dead trees—which combined, commonly surpass the carbon stored in the logs hauled away.

Charting a path for climate-conscious forestry

Time slows down in Zena Forest. Rather than the quick, 45-year metabolism of plantation forestry, Zena’s harvest cycles stretch to 80 years or more. As a result, Zena has trees far older and larger than any in standard working forests, each storing more carbon than the oldest tree in a standard operation. 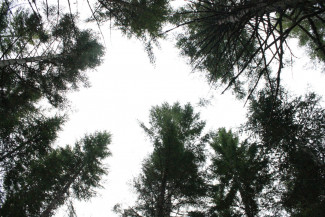 Deumling also avoids clear cuts, despite their efficiency and cost reduction. Instead, she harvests individual trees throughout her 1,300 acres, felling the second-best trunk in each cluster, reducing competition for light and nutrients so the remaining trees can thrive. This continuous, careful culling takes time and an intimate knowledge of the forest, but results in a gradual increase in total growth while protecting and growing the carbon contained within the forest floor and soil.

Extended growing cycles and selective harvests can double carbon stores in Northwest working forests compared with standard operations, without compromising long-term timber production. Forests managed on an 80-year cycle, and that maintain even a modest, though constant, live tree cover, can hold 60 percent or more of the carbon of an old growth forest—twice as much as a plantation-style forest.

So long as we rely on trees for everything from paper towels to the frames of our homes, balancing carbon storage with wood production will be key to climate-smart forestry.

Facilitating the shift to climate-smart forestry

Every pathway to stabilizing global temperatures involves not only dramatic emission reductions, but also heavy reliance on removing carbon from the atmosphere. So far, forests remain the most reliable and economical means of carbon drawdown. And foresters in the Pacific Northwest manage one of the most powerful ecosystems for achieving this sequestration.

But Deumling readily admits that managing Zena for carbon storage has not been easy. The care required for selective harvesting costs time as well as money. And she often receives little price premium for her wood, despite the fact that it has Forest Stewardship Council certification, the gold standard in sustainable forest products worldwide.

As Deumling nears retirement, she plans to hand the business on to her son, Ben. Like his mother, Ben believes in managing Zena as a living ecosystem, with twin goals of timber harvest and carbon capture. But as a father of two, he fears that the income from Zena won’t support his family. Good will doesn’t pay the bills.

Paying foresters to store carbon could shift the economics, unleashing the untapped potential of Northwest forests to combat rapidly rising temperatures. Such a program may be particularly timely as the United States faces a historic economic shock that may hit rural communities particularly hard. A federal forest carbon incentive (FCI) program could pay forest owners who choose to manage with climate-smart techniques, thereby generating new revenue streams and fueling job growth in rural areas while supporting climate progress. The World Resources Institute estimated a federally-funded US forest restoration campaign with an annual budget of $4.5 billion could create some 150,000 new jobs per year across the country.

Incentive payments for land restoration already enjoy bipartisan support in Congress, and several members from both sides of the aisle recently endorsed tree planting as a common-sense carbon capture tactic.