Blooming from early-June well into July, Poison Hemlock, Conium maculatum, is becoming more and more noticeable along roadsides and in moist meadows. Native to Europe and the Mediterranean, Poison hemlock is becoming widely distributed throughout North America.  A member of the Apiaceae, or Parsley family, it can be easily confused with other members of this family, like Parsnip or Queen Anne’s lace, but unlike them, all parts of Poison hemlock are poisonous to livestock and humans. The Greek philosopher Socrates condemned to die for impiety and corrupting the youth of Athens in 399 BC was killed by drinking the juice of poison hemlock.  That said, and with it being April – which just so happens to be an Invasive themed month, since everything’s beginning to bloom.  It’s a good time to make sure you can identify Poison hemlock! 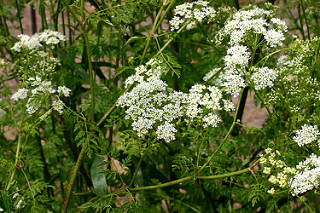 So let’s get started, Poison hemlock is an herbaceous biennial or perennial, with branching stems growing up to 7’ tall in open wet areas, along the edges of streams, roadside ditches, waste and industrial areas. It has a smooth stem, often streaked or spotted with purple, especially on the lower portion. These blotches are called the “blood of Socrates.” The flowers are very small and white, with five petals, blooming in small umbel clusters. The leaves are broadly triangular in outline and as much as 15” long, but are finely divided with a lacy appearance. The roots are fleshy, creamy white and can be mistaken for carrots or parsnips but in most cases, they are branching or divided and stringy rather than single roots like parsnips or carrots and are white rather than orange.

Poison hemlock contains numerous alkaloids, the most potent of which is coniine. Coniine is a neurotoxin, which can cause death by blocking the connections between muscles and nerves. It is described as causing paralysis beginning in the feet and ankles and ascending up the body, and causes death by paralyzing the respiratory muscles.  Additionally, the alkaloids are volatile, and coniine can be absorbed through the skin, so poisoning can occur from smelling or touching the plant.

Poison hemlock reproduces by seed with each plant producing roughly a thousand.  The seeds are spread by birds, animals, and water, though vehicles can also aid in their spread as well. Dispersal occurs between September and February, and germination takes place from late summer to early spring.

In English, 'hemlock' refers not only to poison hemlock, but to water hemlock, hemlock water dropwort, lesser hemlock (fool’s parsley), and other herbs as well, all resembling each other in their lacy, umbrella-like flowers and tiny fruits. Which include edible vegetables like carrots, celery, dill, parsley, and parsnips.  Be aware it is easy to mistake hemlock for these vegetables, often with dire results.

In regards to hemlock Socrates was right. “True wisdom comes to each of us when we realize how little we understand about life, ourselves, and the world around us.”